2015 was an interesting year for me. I finally got Kevin Toms Football out on the market for iOS and I have been able to steadily improve the playability of that game. The process of doing that, looking at the game, deciding what will make it more fun, and implementing those things, was a process that reassured me about using my games design skills incrementally. The current version is a healthy improvement on the release version.

I also put out the idea of rewriting the original 1980s Football Manager for modern mobiles and got such a good response to the idea that I even experimented with a Kickstarter for it. Despite the Kickstarter not succeeding that rewrite has momentum and 2016 will see the release of the rewrite.

In 2016, in the first couple of months, I will release a version of the rewrite of 1980s Football Manager. This game will develop incrementally and be on multiple formats, Android, iOS etc.

I love the experience of developing a game incrementally with people playing it, and for this new game, I will build that into the game itself.

The App store does not allow vouchers, so now I have free game codes as Kickstarter rewards.

For 6 NZ Dollars, about 2.6 British pounds, you get 6 months of free game play.

Bargains right? But I need your backing to be able to complete this game. Please help the Kickstarter rewrite of Football Manager 1980s 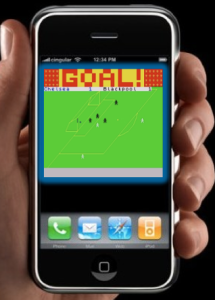 I asked should I rewrite 80s Football Manager for modern mobile platforms, I got a yes, I started: 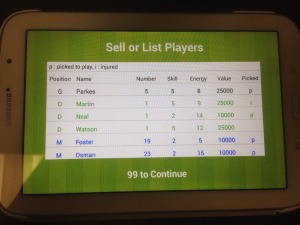 .. and I made good progress. But I realised I need to do this well, and have time to make it as much fun as the original. So I decided to try Kickstarter for support. 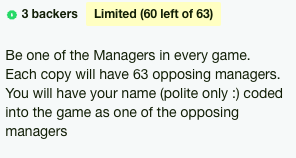 So you can become part of the game itself, on every copy. I thought that was a fun idea, and I hope people like it.